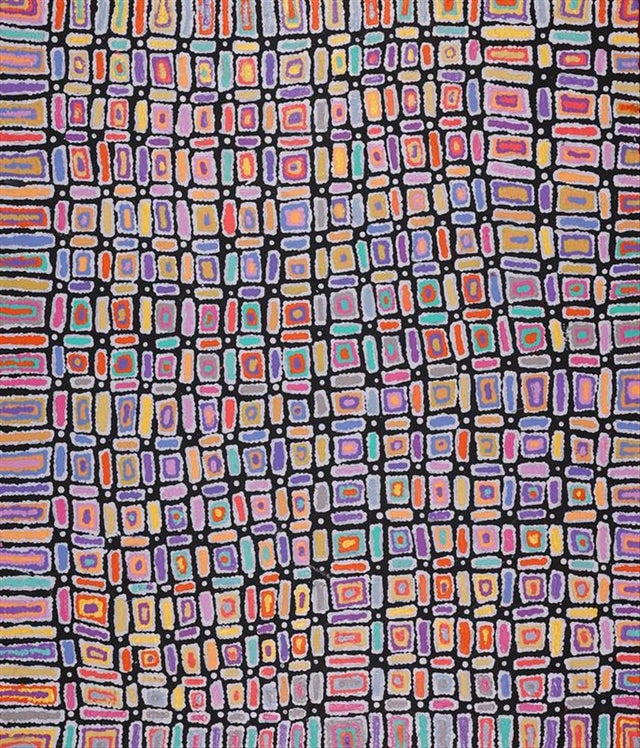 The site depicted in this painting is Puyurru, west of Yuendumu. In the usually dry creek beds are ‘mulju’ (soakages), or naturally occurring wells. The ‘kirda’ (owners) for this site are Nangala/Nampijinpa women and Jangala/Jampijinpa men. Two Jangala men, rainmakers, sang the rain, unleashing a giant storm. The storm travelled across the country from the east to the west, initially travelling with a ‘pamapardu Jukurrpa’ (termite Dreaming) from Warntungurru to Warlura, a waterhole 8 miles east of Yuendumu. At Warlura, a gecko called Yumariyumari blew the storm on to Lapurrukurra and Wilpiri. Bolts of lightning shot out at Wirnpa (also called Mardinymardinypa) and at Kanaralji. At this point the Dreaming track also includes the ‘kurdukurdu mangkurdu Jukurrpa’ (children of the clouds Dreaming). The water Dreaming built hills at Ngamangama using baby clouds and also stuck long pointy clouds into the ground at Jukajuka, where they can still be seen today as rock formations.

Lynette Nangala Singleton was born in 1970 in Alice Springs Hospital, the closest hospital to Yuendumu, a remote Aboriginal community 290 km north-west of Alice Springs in the NT of Australia. She grew up in Yuendumu, attended the local school after which she completed her schooling at Yarara College, an Aboriginal boarding school in Alice Springs. When she finished school she returned to Yuendumu. She is married and although she has no children she has many nieces. She now lives in Nyirripi, an Aboriginal community 160 km north-west of Yuendumu. Lynette has been painting with Warlukurlangu Artists Aboriginal Corporation, an Aboriginal owned and governed art centre located in Yuendumu, since 2008. She paints her Father’s Jukurrpa stories, Dreamings which relate directly to her land, in particular a rock hole west of Lake McKay. These stories have been passed down by her father and her father’s father for millennia. When Lynette is not painting she enjoys hunting for goanna.