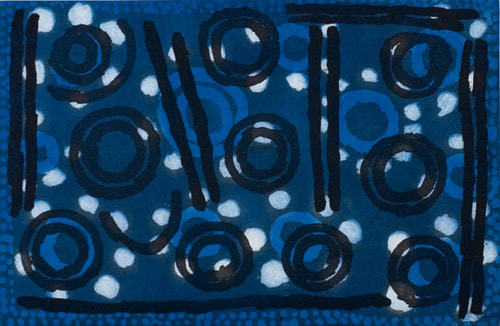 Yanjirlpiri, meaning 'star' in Warlpiri is the place for this Dreaming. There is a collection of rock clusters there, which are stars that came down to earth to rest on the ground. It is an important place for initiation ceremonies and part of this Jukurrpa or Dreaming is closely associated with secret sacred business. Seven Dreamtime Napaljarri women (known astrologically as the Pleiades) are being pursued by a Jakamarra man (the Morning Star in Orion's belt). The women travelled from Purrpala to Yarripilangu and onto Kurlunyalimpa near Yanjirpiri. Here in a final attempt to escape the Jakamarra they become fire and ascend to the heavens to become stars. They can be seen in the night sky today, forever just out of reach of the Jakamarra. This Dreaming belongs to Japaljarri and Jungarrayi men and Napaljarri and Nungarrayi women and much of it cannot be disclosed to the uninitiated. This is another version (a Warlpiri one) of the Nakarra Nakarra Dreaming of the Kukatja.