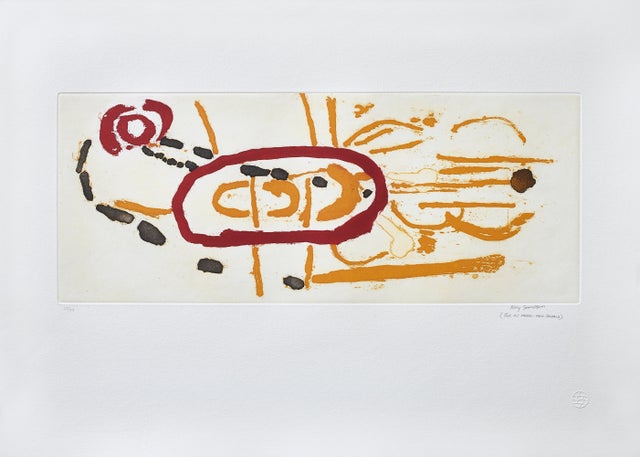 This print was made from the mark the artist made on an etching plate while telling the narrative story, which took place at Thompson's Rockhole in the Tanami Desert. The artist was just three weeks from the end of his life and unable to paint any longer. The marks are exactly as he made them as if drawing in the sand while telling an epic tale. Katinpatimpa was a Jangala, Two women fell in love with him at Thompson's Rockhole where they were living. The women were both Nungarrayis and their father was a Japaljarri.

That Japaljarri gave his daughters to Katinpatimpa. The Jangala married them both, both of the Nungarrayi's daughters.

The Rainman, Ngapa, came and hit him with lightening. Ngapa chased him and struck him, he broke a leg, Katinpatimpa came back and took his two women to a Mulju (a soakwater). That Mulju was called Yantukumanpa.

Ngapa caught up with him there while he was digging for water. The two Nungarrayis told Katinpatimpa to get up and go.

Ngapa chased him all the way back to Thompson's Rockhole.

He put him in the water. They fought fiercely. Katinpatimpa kept moving as he fought all the way to Wollambi.

Ngapa Killed him there.

He had deep marks across his body from the boomerangs that hit him and the spears that pierced his skin.

He turned into a stone at that place. That stone is still there to this day.