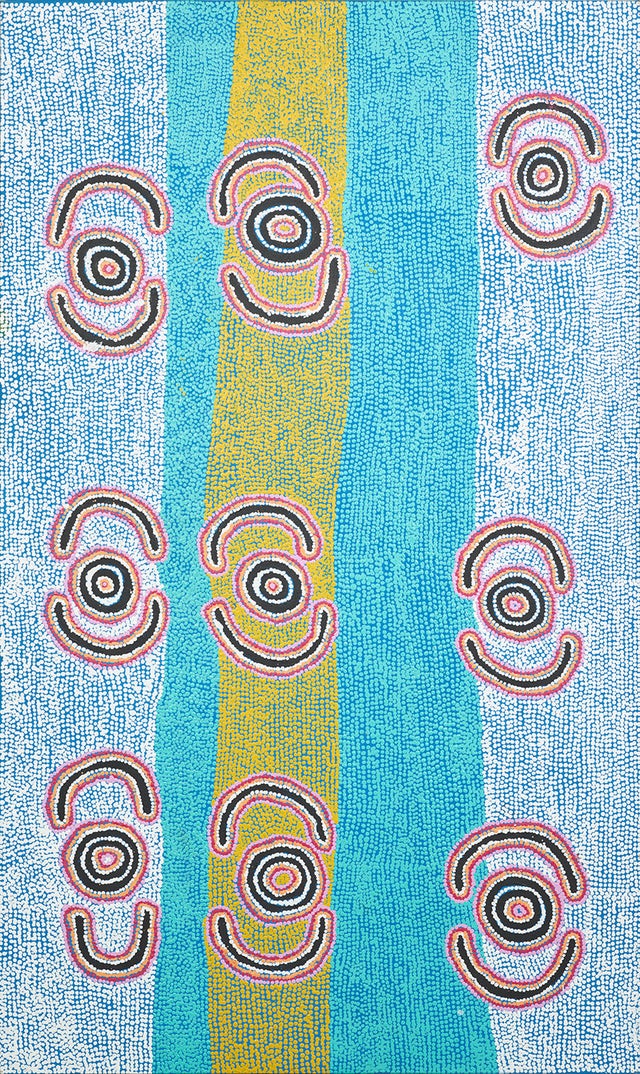 The Jukurrpa of this place tells of a Jungarrayi man, named Lilipinti travelling west to another country for Kurdiji, men's ceremonial business. Jungarrayi, Japaljarri, Jupurrurla and Jampijinpa men were travelling east to Kurpurrulu. On his travels he saw a Napangardi woman, who is his mother-in-law according to the Aboriginal skin system and forbidden to him. Lintyipilinti watched the woman from where he sat whilst she was urinating. He was so impressed with what he saw that he decided to woo her. His imprint has been left in the rocks, which reminds the people of his thinking. Whilst he was sitting at Yumurruluwanu he spun some Wirriji (hair string or hairstring belt) and sung a love song. Jungarrayi was wearing jinjirla (ceremonial adornment) around his arms and neck to look attractive to her. He had weapons and a ngami (coolamon or wooden water carrier). Lilipinti fell in love with her however, and when he arrived back home to Ngarlu he couldn't stop thinking about her. A Jurlpu (bird) carried these love songs over to the Napangardi. The Jurlpu (bird) flew back with the Napangardi on his wings, to join the Jungarrayi at Ngarlu. The women of Ngarlu gossiped about this wrong-skin love union. These women turned into Miinypa, native fuchsia flowers, which are prevalent at Ngarlu today. When Lilipinti and his Napangardi made love, his penis broke off inside of her and they both turned to stone. There is a rock hole at Ngarlu which shows the place of their love-making. They are seen in the rocks at Ngarlu, a long water hole with a broken boulder reminds the people of this union. Wapunungku, a big tree was crying, that tree is still there today. The kirda (owners) of this jukurrpa are the Japaljarri and Jungarrayi men and Napaljarri and Nungarrayi women.