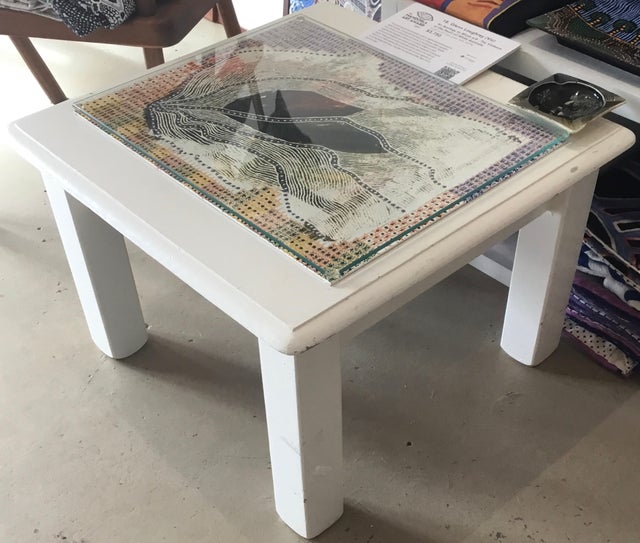 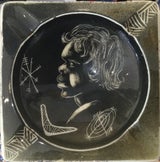 An Apology to Micah 6:8 - The Violence at the Heart of White Australia by Glenn Loughrey

An Apology to Micah 6:8 - The Violence at the Heart of White Australia by Glenn Loughrey

“This work looks at the normalised violence against Aboriginal people by white Australia. It recognises the failure of a Christian settler population who continue to refuse justice and equity to Aboriginal people, despite speaking the language of Micah 6:8. It contains images of a built environment alongside red crosses representing massacres of Aboriginal people. Whiteness surrounds a darkness at the centre of the table top where a pre-1960s ashtray sits, so you can stub out your cigarette out on an Aboriginal child’s face. The table is a well used coffee table from a local op-shop.” This coffee table is another stunning piece by Glenn, which was a finalist in the Mandorla Art Award 2021.

“My art is an expression of my journey into the story of my family and my mob. It reflects the interaction between the dominant culture and the oldest living culture on this planet. It explores the impact of   that interaction from the indigenous point of view with the purpose is to engage, challenge and initiate action leading to unificationand reconciliation.

I use a combination of perspective (a mix of Western and Aboriginal concepts of perspective) and pattern thinking to form the narrative painted using acrylic paints applied by stick one dot or line at a time. The paint is mixed in such a way that it sits out from the canvas      creating a tactile 3 dimension to what, from a distance is two-dimensional. Each painting invites the viewer to touch and engage beyond simply being a spectator or observer.

This reflects the idea of pattern thinking; that there are intertwined patterns below, above t and across country. Nothing is one dimensional or even two-dimensional; the past, present and future are interconnected in one place -everywhere when– the place where you are, and in terms of the art piece, on the canvas." - Glenn Loughrey