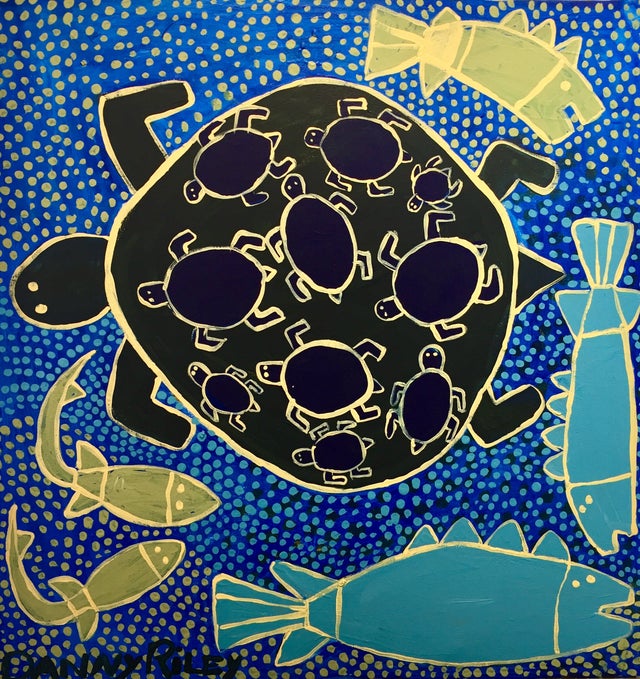 When Danny inherited the shack at Maria Lagoon he used it as the site for his own artistic exploration. What came next was a period of prolific painting until he died in 2007. Throughout this period Danny’s preoccupation was with the aquatic animals with whom he shared his country. Knowledge of these animals is based in keen observation, an intimacy generated through daily interaction and custodial relationship.  Mother and Baby Turtles depicts Riley’s kinship animals, the barramundi, the crayfish and the stingray (Pandanus Gallery n.d.). That these animals are labelled as ‘bush tucker’ in the titles does not diminish their position; it is Danny’s knowledge (of them), as a fisherman, that earns them his regard and respect. Their physical features are expressions of their character, movement and behaviour, their forms simplified into their striking essence; a moment of movement captured in time and space. Each individual goes about its own business, self-motivated and self-directed, perfectly suited to its environment. In totemic relationship, where the emphasis is on kinship and reciprocity, there is fluidity between the conceptual constructs of human animal and non-human animal, which contrasts with western constructs of hierarchical superiority, subsequent disconnection from, and therefore destruction of land (Arabena 2015, 76, 125-6).