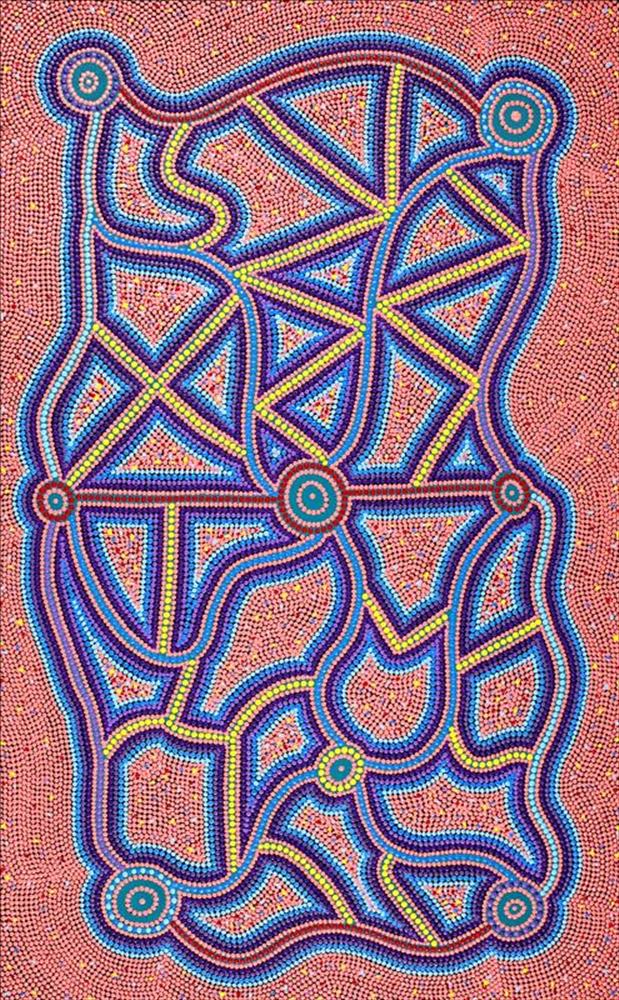 The site depicted in this painting is Puyurru, west of Yuendumu. In the usually dry creek beds are ‘mulju’ (soakages), or naturally occurring wells. The ‘kirda’ (owners) for this site are Nangala/Nampijinpa women and Jangala/Jampijinpa men. Two Jangala men, rainmakers, sang the rain, unleashing a giant storm. The storm travelled across the country from the east to the west, initially travelling with a ‘pamapardu Jukurrpa’ (termite Dreaming) from Warntungurru to Warlura, a waterhole 8 miles east of Yuendumu. At Warlura, a gecko called Yumariyumari blew the storm on to Lapurrukurra and Wilpiri. Bolts of lightning shot out at Wirnpa (also called Mardinymardinypa) and at Kanaralji. At this point the Dreaming track also includes the ‘kurdukurdu mangkurdu Jukurrpa’ (children of the clouds Dreaming). The water Dreaming built hills at Ngamangama using baby clouds and also stuck long pointy clouds into the ground at Jukajuka, where they can still be seen today as rock formations.

Louise Nangala Egan has been painting with Warlukurlangu Artists Aboriginal Corporation, an Aboriginal owned and governed art centre located in Yuendumu, since 2004. She consistently paints her grandfather’s Ngapa Jukurrpa (Water Dreaming) that relates directly to Puryurru, an area west of Yuendumu. These ‘dreamings’ are all about her land, its features and the plants and animals that inhabit it. They have been passed down through the generations for millennia. Louise Initially used traditional iconography but over time she has developed an individualistic style using pattern and design in a variety of contexts to depict her traditional jukurrpa.